While Noel and Jasmine began a long car drive from Atlanta, the other six Poppy Patrol members got on planes in California. Five of us—Georgia, Becky, Lisa, Amy and Carissa—started our journey from the Sacramento Airport. Meanwhile, Holly boarded her flight in Los Angeles.

The Sacramento bunch arrived first. We waited in “Savannah Square” at the airport and were delighted to see Girl Scout banners there to commemorate the historic occasion for all the travelers who would pass by. We formed a “bridge” with arched arms for Holly when we knew she was disembarking from her plane. She knew just what to do when she saw our bridge! She came sailing and laughing under our arches. We got a taxi to the hotel where the entire patrol was united with joy!
Answer to Poppy Patrol Pop Trivia Question #1: A yellow floribunda (Girl Scout rose) and a dwarf green & gold Brownie Scout marigold were the two custom-cultivated flowers Girl Scouts planted all over the U.S. in honor of Girl Scouts’ 50th anniversary in 1962. 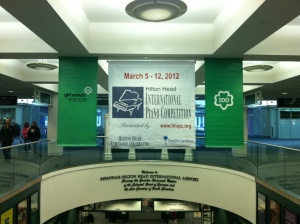 Girl Scout green at the airport in Savannah.